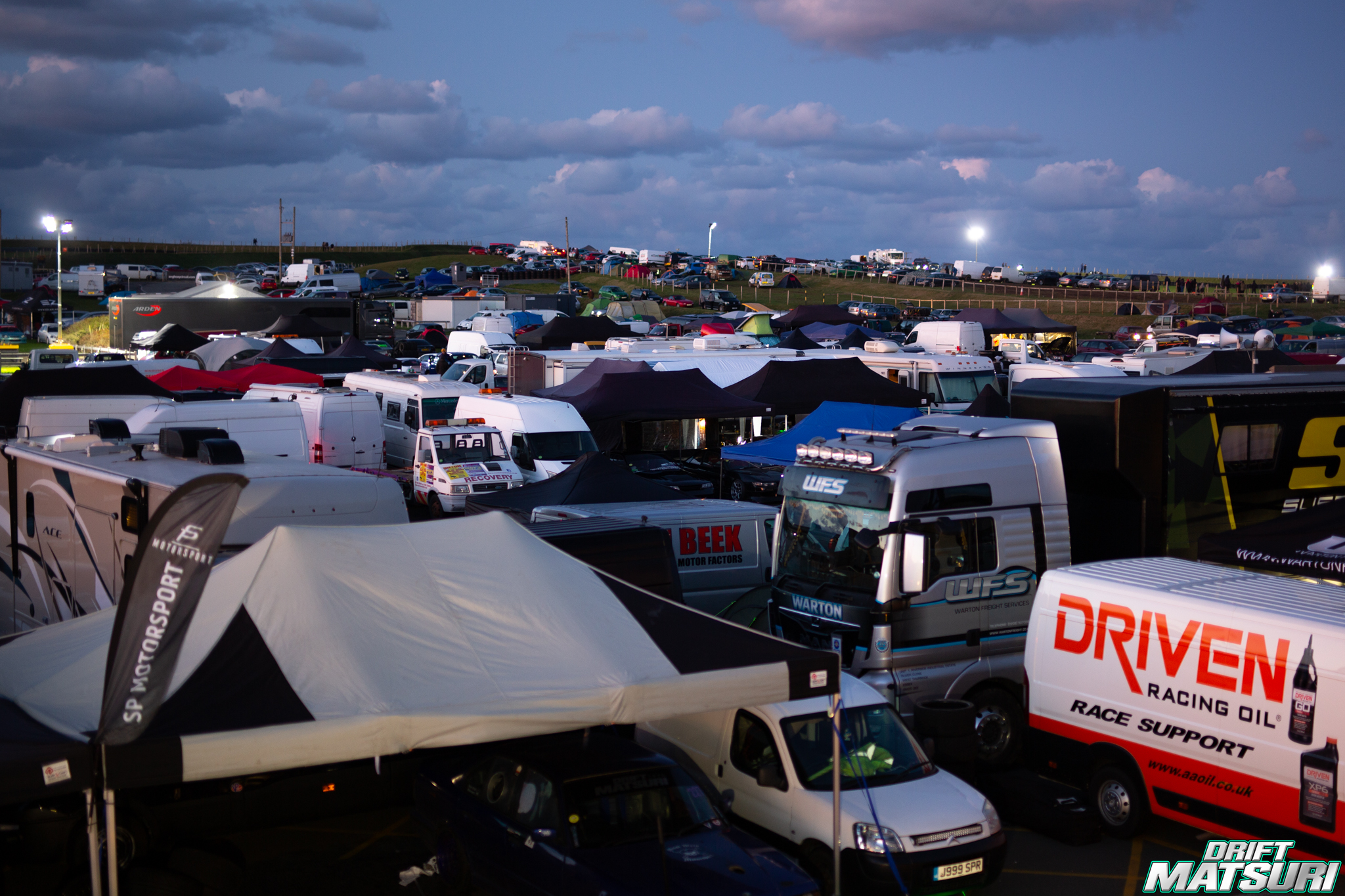 By Robert BorowikNovember 13, 2019No Comments

Drift Matsuri held its 7th annual end of year event at Anglesey Race Circuit in North Wales. Since 2013 it has grown to become the one event that many of the drift scene strive to do regardless of other competitions, practice days and demos.

The weekend really starts early as most people try to leave work early on Friday, making their way to the track from all corners of the United Kingdom along with a few from Ireland.

The paddock quickly filled up with drivers setting up their pit area and checking over their cars before a long weekend of drifting. The rain didn’t dampen people’s spirits as they caught up with friends, fitted their sun strips and got their cars scruitineered.

Saturday morning kicked off with driver briefings before the tracks went live for the morning session. The usual three tracks were open for all drivers, giving them the option to swap between them as much as they wanted.

The fast track is always popular as its one of the only times that drivers can drift at such high speeds with many drivers managing to link the first corner to the hairpin without needing to manji the straight.

The touge track is the other busy layout with the queue often being the biggest throughout the event. The drivers didn’t have to wait long between runs with large trains of cars leaving the start line.

This track twists its way up the hill to the top of the circuit before looping back around and down to the finish. It’s a favourite of many of the drivers and spectators too as the view is incredible!

Aside from the attraction of being able to drive several different tracks within one venue, Drift Matsuri gives drivers of all abilities a chance to drift together and learn from each other. It’s not uncommon to see a British Drift Championship driver on track with drivers that may have never competed before.

The spectators get to see a wide variety of cars on track, the usual S-Chassis and R-Bodies were well represented but also some rarer cars were out on track.

Harry Hudson has been getting everyone’s attention this year in the ex-Huxley Motorsport RA28 Celica. The car is driven hard in Driftcup and this event was no different, Harry managed to hit some tyres causing some damage to the car but he was still enjoying himself afterwards!

Ford might not be the brand that you associate with drifting but they were out in force with a few Escorts and even an Escort van.

A quick walk through the paddock wasn’t possible with so many cars to draw your attention away at every turn.

The end of the day came around after what felt like only a few hours but as the light faded the drifting wasn’t over. A selection of invited drivers lined up for the night demos. Think 40+ drivers, very little lighting other than what’s on the cars and large trains of cars on track at the same time.

The drivers really excelled this year with their lighting solutions with several cars sporting rally light bars and neons.

The night session was purely for the entertainment of the crowd which loved every minute of it.

After an hour or so the drivers all left the line together for a couple of runs in trains of 20+ cars before the session ended with a fireworks display.

That ended the track action for the day but the party was only just starting for many people around the track. The official party was in one of the pit garages with Mike Lewis smashing out the tunes until the early hours but groups of friends could be seen all over the paddock having their own parties.

Sunday morning was a slow start to the day for the guys that partied until late but for others they were eager to head out onto the tracks for another full day of drifting.

After another 7 hours of drifting the paddock slowly started to clear out, drivers loaded up their cars and headed home, memories made that will need to last through the next year before we will do it all over again. Until next time!