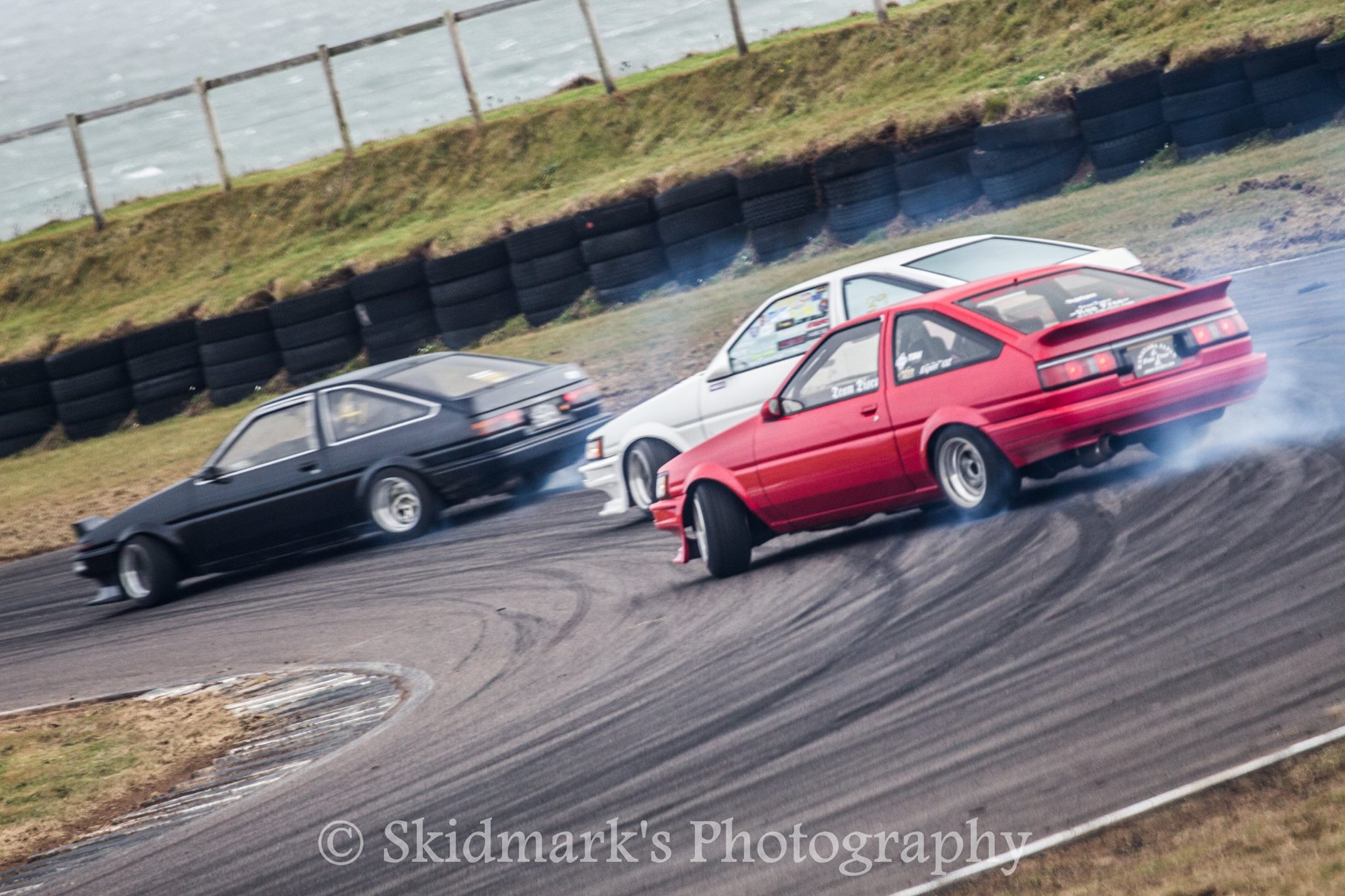 The sight of hundreds of drifters descending on Anglesey circuit could only mean one thing – Drift Matsuri 2014 was upon us! Following the huge success of last year’s event there was no doubt in anyone’s mind that we would be doing it all over again the following year.

The action kicked off first thing Saturday morning with a full complement of open pitlane drifters ready to rub shoulders with some of the finest drifters from the UK and Ireland that had made the trip to compete in the day’s main event: the UK v Ireland Top 32 Night Fight.

With three circuit layouts to pick and choose from as they wished throughout the day the seat time on offer was simply fantastic for the drivers; the Touge Course, Backwards Entry hairpin and Maximum Attack course offering a wide array of challenges for everyone taking part.

While there were some familiar sights in the paddock in the shape of the BDC and IDC regulars there was also a large selection of street driven eye candy taking part and enjoying the challenges that Anglesey presents.

The Team Tekno AE86s were a sight to behold, their glorious N/A soundtrack echoing off the surrounding Welsh countryside as they tore up the Touge course in procession. Featuring UK drifting veteran Chris “Paz” Parry in their line-up they quickly became a favourite with the drivers and spectators alike.

This trio of JZX100s also quickly became favourites in the pits – their owners Shane Mooney, Greg Davis and Ian Price having driven them over from Ireland the night before. The sound of three 1JZs at full chat is always an enjoyable experience; especially so when it’s being created by one of these big four door behemoths.

A number of Retro Drift Challenge drivers were also out in force, offering a stark contrast to some of the high powered and relatively modern liveried-up competition cars.

If there was one competition car that stole the show though, it was the Low Brain Drifters PS13 with Ireland’s James Deane behind the wheel. The V8 soundtrack and smokescreen that followed it made it a crowd favourite right from the off – and that was before the Night Fight had even begun!

As the sun began to set over Anglesey it marked the end of the first day of open pitlane drifting and the beginning of the main event as thirty two of the UK and Ireland’s top drifters lined up and prepared their cars to do battle under the cover of darkness.

With the first wave of Top 32 battles having been hyped up on social media in the weeks leading up to the event you could feel the anticipation in the air. Tensions were high in the judging tower as Sid Crowfoot, Paddy Macken and Alex Law were primed and ready to oversee proceedings.

With the thirty two drivers whittled down to sixteen, eight and then subsequently four, the Semi Finals saw Adrian Walsh, James Deane and Wesley Keating representing the Irish with only Matt Tilyard remaining to uphold the honour of the UK.

A hugely dramatic battle between James and Wesley saw the judges call one more time, with James taking the win by the slimmest of margins. Matt defeated Adrian clean and clear, earning his place in the final for a UK v Ireland showdown!

In the final Matt overcooked his chase run and put four wheels off track, while James’ chase run was the perfect demonstration of his dominance of the event. Having barely put a foot wrong throughout the contest, Team Ireland and James Deane were crowned the 2014 Drift Matsuri Night Fight champions!

…while others tried to mix partying and car repairs at the same time!

As the sun rose over the circuit on Sunday morning a number of bleary faces were seen emerging from tents and pit vehicles around the paddock. With another day of open pitlane drifting ahead of us the sound of exhausts quickly filled the pits as the drivers got ready to hit up the three track layouts all over again.

The mix of drivers from all walks of the drift scene made for some great twinning practice, with BDC drivers getting up close and personal with grassroots drivers and vice versa,

Team Falken UK also made the most of the seat time on offer and spent the day honing their proximity skills.

As the day began to come to a close the action started to wind down as the sun started to set. With a paddock full of exhausted drivers, pit crew and spectators loading up for their respective journeys home there was no doubt that Drift Matsuri 2014 had been an overwhelming success and no one was seen leaving without a grin on their face. Bring on Drift Matsuri 2015!

You can view our event picture gallery on the DriftMatsuri Facebook page here.